Home ▶ Press Releases ▶ Most Reverend Nelson J. Pérez to Preside Over the Closing Ceremony for the Archdiocesan Phase of the Cause of Beatification and Canonization of the Servant of God, William E. Atkinson

Most Reverend Nelson J. Pérez to Preside Over the Closing Ceremony for the Archdiocesan Phase of the Cause of Beatification and Canonization of the Servant of God, William E. Atkinson

The Archdiocese of Philadelphia announces the Closing Session in the Archdiocesan phase of the Cause of Beatification and Canonization of the Servant of God, William E. Atkinson (1946-2006), a professed priest of the Order of Saint Augustine, to take place on Tuesday, October 19, at 6:30 p.m., in the Church of Saint Thomas of Villanova, on the campus of Villanova University.

The ceremony, to be presided over by Most Reverend Nelson J. Pérez, Archbishop of Philadelphia, is open to the public, subject to seating capacity and prevailing COVID-19 protocols at Villanova University.

Born in Philadelphia, Father Atkinson is the first quadriplegic ordained as a priest in the history of the Roman Catholic Church.  He was stationed at Monsignor Bonner High School for almost thirty years (1975-2004). There, he served on the faculty and as assistant school chaplain, moderator of the football team, and director of the afterschool and Saturday detention program affectionately known as “JUG” (“Justice Under God”).

The Closing Session brings to completion the juridical inquiry into his life, virtues, and reputation of holiness and of intercessory power that began in 2015. Since then, the Archdiocese has examined historical documents, heard witness testimonies, and conducted related investigations – all for the purpose of gathering proofs in order to attain moral certitude about his life of heroic virtue.

The diocesan inquiry represents the initial phase in a lengthy process which also includes a Roman inquiry into Father Atkinson’s virtuous life and reputation for sanctity, separate diocesan and Roman investigations of possible miracles attributed to the intercession of Father Atkinson, the considered judgment of the members of the Vatican’s Congregation for the Causes of Saints, and, ultimately, the decision of the Holy Father regarding the outcome of the Cause.

During the Closing Session, at which will be present local and international leaders of the Augustinian religious order, Archdiocesan officials will provide information summarizing the six-year long inquiry, and the Archbishop will decree that the documentation be authenticated, sealed, and delivered to the Congregation at the Vatican.

Anyone seeking further information about Father Atkinson and his Cause, or wishing to support it through the Father Bill Atkinson Guild, is invited to visit the official Augustinian website at www.augustinian.org/the-cause. Visitors to the site can also access there the 2020 PBS documentary entitled “Extraordinary: The Bill Atkinson Story.” 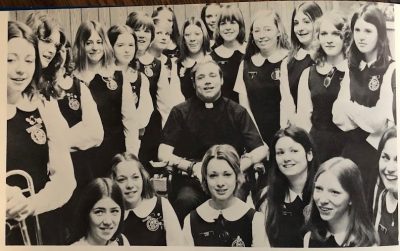