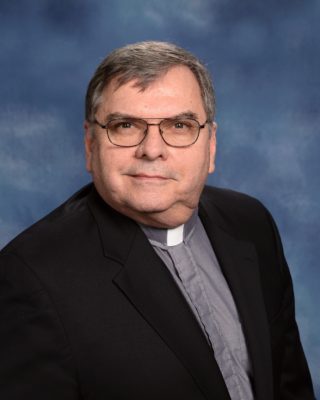 Deacon James J. Elliott, permanent deacon, died on April 1, 2021, at his residence as a result of natural causes. He was 71 years old. Deacon Elliott was born on November 3, 1949, in Wilmington, Delaware. He was the son of the late Harry and Regina Elliott.

Deacon Elliott attended Salesianum High School graduating in the class of 1967.  He earned his Bachelor’s Degree and MBA from University of Delaware finishing his Master’s Degree in 1973.  He worked for Anixter in Media as a Sales Engineer.  He and his wife, Marie, were married for 50 years, and they have three adult sons: James, Michael, and Steven, along with four granddaughters: April, Makayla, Addison and Victoria.  Deacon Elliott is also survived by his brother Harry Elliott of Wilmington, DE

Deacon Elliott was ordained at the Cathedral Basilica of Saints Peter and Paul on June 1, 2013, by the Most Reverend Charles J. Chaput, O.F.M., Cap. He was assigned to Saint Patrick Church, Kennett Square, where he remained.

A viewing will be held on Wednesday, April 7, 2021, from 6:00 PM to 8:00 PM at the Kuzo Funeral Home, 250 W. State Street, Kennett Square, PA 19348.  Reception of the body and viewing will be held on Thursday, April 8, 2021, beginning at 9:00 AM at Saint Patrick Church, 212 Meredith Street, Kennett Square, followed by his Funeral Mass at 11:00 AM.  The principle celebrant Most Reverend John J. McIntyre, the concelebrant and homilist will be Reverend Christopher B. Rogers.  The Deacon Assisting at the Liturgy of the Word will be Deacon Matthew J. Hrobak.  The Deacon Assisting at the Altar will be Deacon Daniel Bingnear.  Interment will follow at Saint Patrick’s Cemetery, Kennett Square, immediately following the Funeral Mass.

NOTE: Due to the limited size of Saint Patrick’s Church, in consideration of the ongoing pandemic, clergy outside of the Permanent Diaconate Class of 2013, are encouraged to view the Mass live-streamed on Saint Patrick’s website: https://www.stpatrickkennettsquare.org/