So it is that in accordance with the Divine Plan a wonderful variety of religious communities has grown up which has made it easier for the church … to be equipped for every good work and ready for the work of the ministry—the building up of the Body of Christ. —
Second Vatican Council, Decree on the Adaptation and Renewal of Religious Life Perfectae Caritatis, no. 1

In 1997, Pope Saint John Paul II instituted a day of prayer for women and men in consecrated life. This celebration is attached to the Feast of the Presentation of the Lord on February 2nd. This Feast is also known as Candlemas Day; the day on which candles are blessed symbolizing Christ who is the light of the world. So too, those in consecrated life are called to reflect the light of Jesus Christ to all peoples. The celebration of World Day for Consecrated Life is transferred to the following Sunday in order to highlight the gift of consecrated persons for the whole Church. 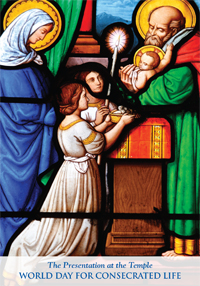 Prayers of the Faithful

For those consecrated to God by the vows of chastity, poverty and obedience that they may seek to live their baptismal promises more intensely and have the grace to persevere in their commitment to the Lord and serve with open hearts and willing spirits. We pray to the Lord…

For those who have responded to the prompting of the Holy Spirit to be a consecrated person that they may experience the support of the Church as they continue their growth in holiness. We pray to the Lord…

Saint Joseph is widely known for being husband to the Virgin Mary and foster father to Jesus, the Son of God. Although it is believed that he died while Jesus was young, he played an extremely important role in taking care of Him and Mary during His early years. Saint Joseph is easy to look up to in times of doubt and fear. He showed his true character in protecting and taking care of Mary when she was pregnant, even before he knew that the child she was pregnant with was the Son of God. This protection continued on as he listened to the angel and fled everything he knew and loved to take Mary to Bethlehem to find safety before she gave birth. Joseph laid down his life for God and for a son who was not biologically his own, showing us all what a true life of trust and discipleship looks like. Here are some of our favorite quotes about Saint Joseph that will strengthen your devotion to him:

Meditations and Sermons on St. Joseph

Unity of the Family and Respect for Life
Pope John Paul II, March 19, 1981

The Family Is a Community of Love, Life and Prayer
Pope John Paul II, March 19, 1987

St. Joseph Continues in His Role as Protector of the Body of Christ
Pope John Paul II, March 19, 1993

St. Joseph: A Theological Introduction
Michael D. Griffin, O.C.D. This study of St. Joseph covers his place in Sacred Scripture, the writings of theologians and devotion to him as proposed by the Church. 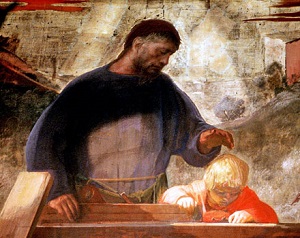 Hail, Guardian of the Redeemer,
Spouse of the Blessed Virgin Mary.
To you God entrusted his only Son;
in you Mary placed her trust;
with you Christ became man.

Blessed Joseph, to us too,
show yourself a father
and guide us in the path of life.
Obtain for us grace, mercy, and courage,
and defend us from every evil.  Amen.

With the Apostolic Letter “Patris corde” (“With a Father’s Heart”), Pope Francis recalls the 150th anniversary of the declaration of Saint Joseph as Patron of the Universal Church. To mark the occasion, the Holy Father has proclaimed a:

To assist those who feel called to the consecrated life, the Office for Consecrated Life lists those Congregations who serve in the Archdiocese of Philadelphia. Please see listing below.