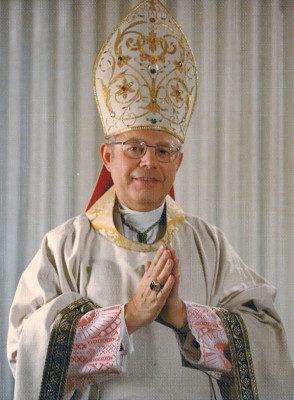 Most Reverend Martin N. Lohmuller, retired Auxiliary Bishop of Philadelphia and Titular Bishop of Ramsbury, died on the afternoon of Tuesday, January 24th at the age of 97. At the time of his death, he was the oldest living Roman Catholic bishop in the United States of America.

Bishop Lohmuller was ordained a priest for the Archdiocese of Philadelphia on June 3, 1944 by Most Reverend Hugh L. Lamb. He was named an Honorary Prelate to His Holiness, then-Pope, now-Saint John XXIII, with the title of Monsignor on May 18, 1959 and ordained a bishop by the late John Cardinal Krol on April 2, 1970.

He died at Saint Joseph’s Manor in Meadowbrook (Montgomery County) yesterday afternoon following a lengthy illness. Funeral arrangements are pending and will be publicly announced when finalized.

“I was saddened to learn of the death of Bishop Lohmuller,” said Archbishop Charles J. Chaput, O.F.M. Cap. “Bishop Lohmuller was a man of great apostolic and personal energy. Through his many good works on behalf of the Church and Her people, he lived out his episcopal motto of ‘Love, Fidelity, Peace’ each day.”

Archbishop Chaput continued, “I ask the people of the Archdiocese of Philadelphia to offer prayers for Bishop Lohmuller, and I invite our priests to offer Mass for the happy repose of his soul. We are all grateful for the gift of his life and his selfless service. May God grant him the gift of eternal life and give peace and consolation to all those who mourn his passing.”

Martin N. Lohmuller was born to the late Martin and Mary (Doser) Lohmuller on August 21, 1919. He grew up in the Hunting Park section of Philadelphia and attended the former Saint Henry School in North Philadelphia.

After his sophomore year at the former Northeast Catholic High School, he enrolled in what was then a minor seminary program for high school age students discerning a vocation to the Priesthood at Saint Charles Borromeo Seminary. Following completion of the program of priestly formation and his ordination, then-Father Lohmuller completed a brief stint as chaplain at the Catholic Home in Marple Township (Delaware County). He was then sent to the Catholic University of America as a student-priest to pursue a doctorate level degree in canon law, which he obtained in 1947.

Upon his return to Philadelphia in 1947, then-Father Lohmuller was assigned to the faculty of the former Saint James Catholic High School for Boys in Chester (Delaware County). One year later he was temporarily loaned for extern service to the Diocese of Harrisburg as then-Bishop George Leech was in need of a Canon Lawyer for his diocese. That temporary loan would span 22 years.

While in Harrisburg, then-Father Lohmuller was active in the life of various communities. He was the founding Pastor of Our Lady of Good Counsel Parish in Marysville (Perry County). With the establishment of this parish, he became the first ever resident priest in the county’s history. In 1953, then-Father Lohmuller spearheaded planning efforts to open a Catholic hospital in the region. Largely as a result of his work, Holy Spirit Hospital in Camp Hill (Cumberland County) opened in 1963 in affiliation with the Sisters of Christian Charity. Today, it remains a flourishing Catholic community hospital with capacity to serve over 300 patients.

While serving near the seat of government for the Commonwealth of Pennsylvania then-Father Lohmuller saw the need for ongoing dialogue between representatives of the Church and elected officials. Through his urging the Pennsylvania Catholic Conference (PCC) was founded in 1958 to fill that need. He would go on to serve the PCC in various capacities and was a member of its Executive Board for 25 years.

In February 1970, then-Monsignor Lohmuller was notified by the Vatican of his appointment as an Auxiliary Bishop for his home Archdiocese of Philadelphia. Bishop Lohmuller was ordained to the episcopacy at the Cathedral Basilica of Saints Peter and Paul on April 2, 1970. The Principal Consecrator was the late John Cardinal Krol, who was then serving as Archbishop of Philadelphia. Bishops John J. Graham and Gerald V. McDevitt, then serving as Auxiliary Bishops of Philadelphia, served as the Co-Consecrators. For his episcopal motto Bishop Lohmuller chose, “Love, Fidelity, Peace.”

Beginning in 1970 Bishop Lohmuller would work closely with Cardinal Krol on a number of major initiatives in the life of the Archdiocese until the Cardinal’s retirement in 1988. One of his early tasks was to oversee the planning and construction of the current Archdiocesan Pastoral Center, which houses the central administrative offices of the local Church. Prior to that time, administrative offices had been spread out in smaller buildings and converted homes in the City of Philadelphia. He was also instrumental in the founding of Nutritional Development Services of the Archdiocese of Philadelphia (NDS), which seeks to combat hunger throughout the five-county region. The bishop signed the original articles of incorporation for NDS in 1973 and served as chairman of its board until 1989 when it formally became a division of the Archdiocesan Secretariat for Catholic Human Services. In addition to these projects, Bishop Lohmuller played a major role in the success of the International Eucharistic Congress hosted by the Archdiocese in 1976 and the visit of then-Pope, now-Saint John Paul II in 1979.

Later, Bishop Lohmuller would oversee the founding of Saint Martha Manor, the first Catholic nursing home in Chester County and serve as pastor of Old Saint Mary’s and Holy Trinity Parishes in Olde City Philadelphia while tending to his duties as an Auxiliary Bishop. Bishop Lohmuller officially retired at age 75 in 1994, but maintained a busy Confirmation schedule for the next decade. He spent the final years of his retirement in quiet residence at Saint Cyril of Jerusalem Parish in Jamison (Bucks County).

Editor’s Note: A file photo of Bishop Lohmuller is attached that was taken shortly after his episcopal ordination. It can be used with credit to the Philadelphia Archdiocesan Historical Research Center (PAHRC).