Deacon Adolfo Crespo (2007), age 75, passed away as a result of heart failure on the morning of January 15, 2022, at home, shortly after his release from Lower Bucks County Hospital.

Deacon Crespo was ordained by Cardinal Justin Rigali on June 2, 2007, at the Cathedral Basilica of Saints Peter and Paul, Philadelphia. He was assigned to Saint Mark Parish, Bristol until 2009. At that time, he was transferred to Our Lady of Fatima Parish, Bensalem, where he remained until the parish merged with Saint Charles Borromeo Parish, Bensalem. Saint Charles Borromeo Parish was Deacon Crespo’s current assignment; however, his family remained members of Saint Mark Parish, where his wife Inocencia was the choir director.

Deacon Crespo was born in Utuado, Puerto Rico on January 4, 1947. His family moved to lower Bucks County, Pennsylvania in March of 1957, and were members of Saint Ann Parish, Bristol.

Deacon Crespo served for two years in the United States Army, and was assigned to a base in Germany during the time period of the Vietnam War. Upon returning home, Deacon Crespo found employment in clerical work with positions at various factories, Amtrak, and the U.S. Navy. He retired 27 years ago due to health reasons.

Deacon Crespo and his wife Inocencia were married for 51 years. They have six children, 13 grandchildren (one is deceased), and two great-grandchildren. He is also survived by five brothers and four sisters.

Reception of the body and viewing will be held on Friday, January 21, 2022, beginning at 8:30 AM at Saint Mark Church, 1025 Radcliffe Street, Bristol, followed by his Funeral Mass at 11:00 AM.  Bishop Edward M. Deliman will be the main celebrant. Reverend Dennis M. Mooney, and Reverend Philip M. Forlano will be concelebrants. Homilist will be Father Mooney, and Deacon of the Mass will be Deacon Felipe Hernandez. 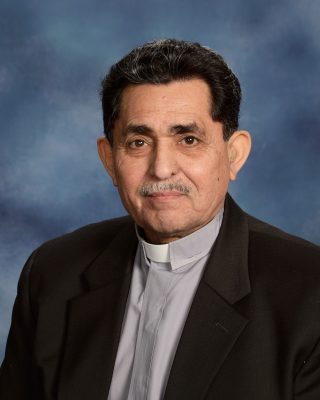